Hello and welcome to the RandomThingsTours blog tour for The House By The Cemetery by John Everson.

First of all thank you to Anne for having me on the tour and to FlameTreePress for sending me an awesome copy of the book to read.

It’s October so the Halloween season has begun, how many of you are planing to visit a Haunted House this year? If you knew the house was really haunted before it was opened as an attraction would you still want to go? How do you tell what’s pretend and what’s real? Is that an actor jumping out at you or a real ghost trying to scare you out of their house? I dare you to read The House By The Cemetery before you visit a haunted house and see how scared you really are!

“Rumor has it that the abandoned house by the cemetery is haunted by the ghost of a witch. But rumors won’t stop carpenter Mike Kostner from rehabbing the place as a haunted house attraction. Soon he’ll learn that fresh wood and nails can’t keep decades of rumors down. There are noises in the walls, and fresh blood on the floor: secrets that would be better not to discover. And behind the rumors is a real ghost who will do whatever it takes to ensure the house reopens. She needs people to fill her house on Halloween. There’s a dark, horrible ritual to fulfill. Because while the witch may have been dead… she doesn’t intend to stay that way.” 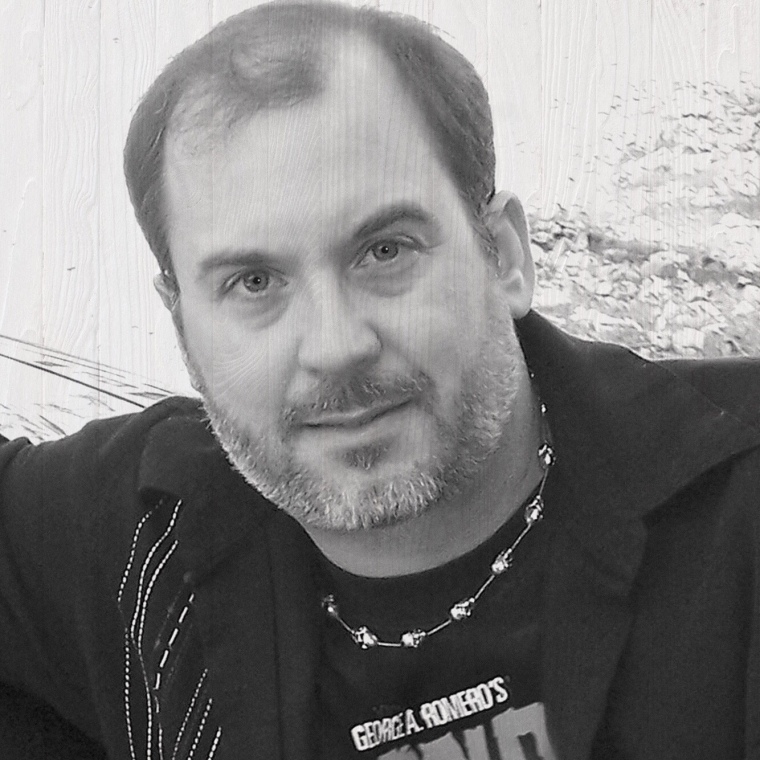 John shares a deep purple den in Naperville, Illinois with a cockatoo and cockatiel, a disparate collection of fake skulls, twisted skeletal fairies, Alan Clark illustrations and a large stuffed Eeyore. There’s also a mounted Chinese fowling spider named Stoker, an ever-growing shelf of custom mix CDs and an acoustic guitar that he can’t really play but that his son likes to hear him beat on anyway. Sometimes his wife is surprised to find him shuffling through more public areas of the house, but it’s usually only to brew another cup of coffee. In order to avoid the onerous task of writing, he occasionally records pop-rock songs in a hidden home studio, experiments with the insatiable culinary joys of the jalapeno, designs book covers for a variety of small presses, loses hours in expanding an array of gardens and chases frequent excursions into the bizarre visual headspace of ’70s euro-horror DVDs with a shot of Makers Mark and a tall glass of Revolution Brewing’s Anti-Hero IPA.

Learn more about John on his site, http://www.johneverson.com/, where you can sign up for a direct-from-the-author monthly e-newsletter with information on new books, contests and occasionally, free fiction.

I honestly really enjoyed reading The House By The Cemetery by John Everson. It was such a fun read full of proper slasher chainsaw witchy gory haunted horror fun. It’s a must read for horror fans especially this time of year. You’ll be tickled when you see old horror movies mentioned as they attempt to create a haunted horror attraction (in an actual haunted house!) from Texas Chainsaw to Freddy, Susperia to Night of the Living Dead, I got a great kick out of it. Reading this was like watching a good slasher movie and screaming NO DON’T GO IN THERE.. or wondering how they don’t realise that the girl who just magically appears and disappears is probably already dead!

It might not be everyone’s cup of tea but I loved the story, the mystery and the build up to the gorefest at the end. It worked really well and kept me entertained and rewarded me with blood spattered images that would make Rob Zombie smile. Loved it!

Many thanks again to Anne for having me on this tour and FlameTreePress for the book, all opinions are my own and I am not paid to give them.

12 thoughts on “Blog Tour: The House By The Cemetery by John Everson”

Five Minds by Guy Morpuss was a really good read, such a weird take on reducing over population. Five random people sharing one body, things are bound to go wrong! 📖
Had another trip to the library, in the mood for some thriller and horror vibes this month, have you read any of these? 📚
It took me forever but I finally read House of Sky and Breath, I would have thrown the book across the room when it ended only it weighs a tonne but argh can’t believe I have to wait for the next book 🙈😅 it was fantastic I loved it!!!
Really enjoyed The Burning Girls by CJ Tudor, took me back to when I first read The Chalk Man really pulled me in 📖📚
There hasn’t been a book by VE Schwab that I haven’t enjoyed and Gallant is no exception, full of spooky vibes and lots of atmosphere it was an easy read perfect for marking halfway to Halloween 👻
Finally read The Last Wish, I really liked it, it’s basically most of the stories that were in the first series and it’s like Geralt is recalling them while he’s taking time to heal after an injury. I definitely think I would like to read the series, can never have enough of The Witcher like 🐺