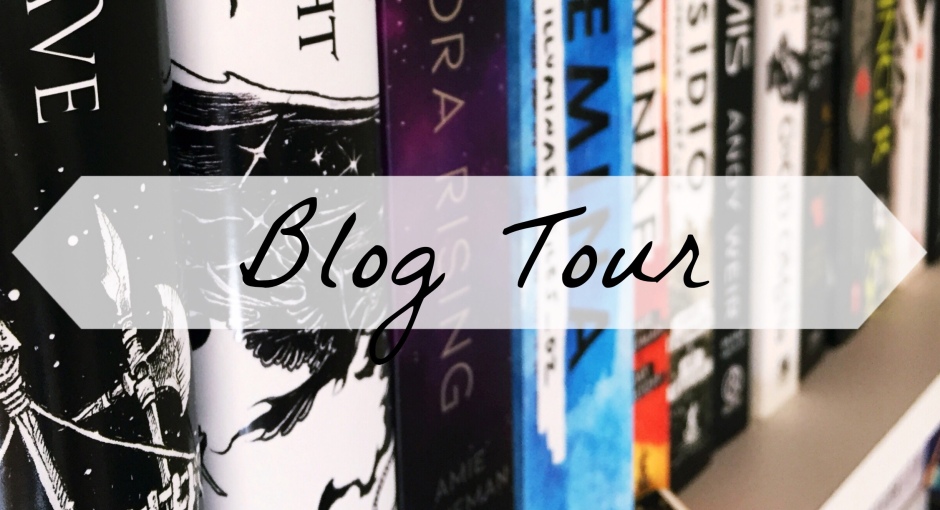 Hello and welcome to my stop on the RandomThingsTours blog tour for The Guest List by Lucy Foley. 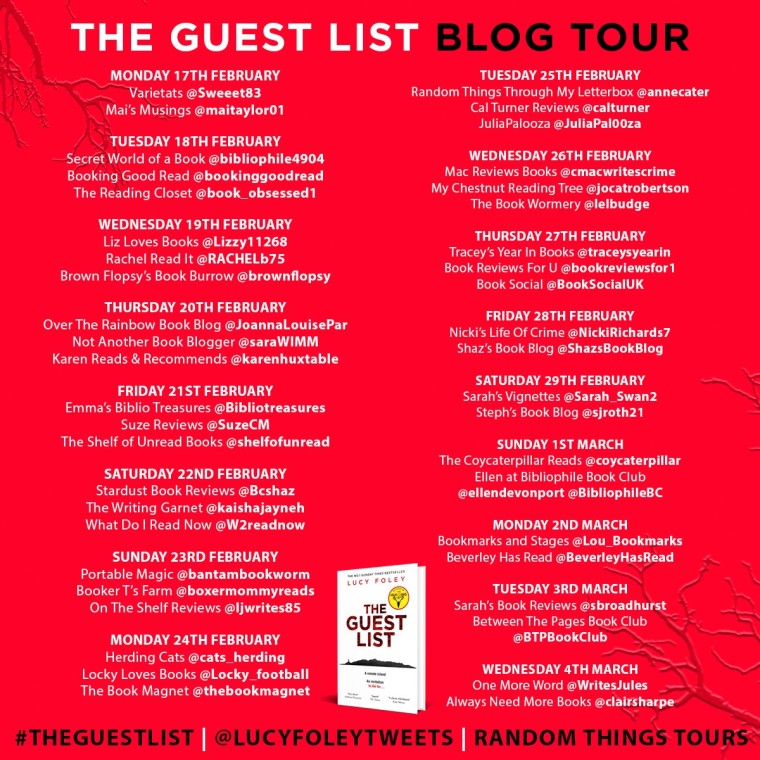 Another murder. Another mystery.

Guests are called to a remote island off the Irish coast to celebrate the wedding of the year – the marriage of Jules and Will. Everything has been meticulously planned, the scene is set, old friends are back together.

It should be the perfect day.

Until the discovery of a body signals the perfect murder.

A groom with a secret. A bridesmaid with a grudge. A plus one with motive. A best man with a past. 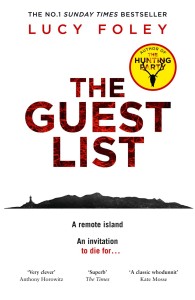 The Guest List is a very highly anticipated read after her stand out thriller The Hunting Party last year which I thoroughly enjoyed. This book follows a similar concept to her last book with a nonlinear timeline but admittedly it took me a bit longer to get into at first. It’s a slow burner to begin with while all of the characters are introduced and we get to know a bit about them, their history and how they’re connected. There’s definitely an edge to everything so you know that everything isn’t rosy. About half way through the pace suddenly speeds up and this is where I really got into it, everything starts happening and secrets start to emerge and it becomes harder to tell who the victim might be and what happened to them. I enjoyed this side to it as suddenly everyone has a reason to hurt someone! The more history that unravels the more there is at stake. Someone has something to hide, someone has made mistakes and someone has to pay.. question is who is it? An enjoyable thriller it will catch you off guard because you will think you have it nailed.. but you never really do. 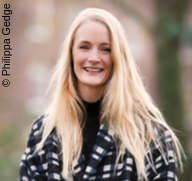 Lucy Foley studied English Literature at Durham and UCL universities and worked for several years as a fiction editor in the publishing industry, before leaving to write full-time. The Hunting Party, an instant Sunday Times and Irish Times no.1 bestseller, was Lucy’s debut crime novel, inspired by a particularly remote spot in Scotland that fired her imagination. Lucy is also the author of three historical novels, which have been translated into sixteen languages. Her journalism has appeared in ES Magazine, Sunday Times Style, Grazia and more.

Many thanks to Anne and HarperFiction for having me on this tour, all opinions are my own and I am not paid to give them.

8 thoughts on “Blog Tour: The Guest List by Lucy Foley”

Book Review: The Twisted Ones by T. Kingfisher @UrsulaV Oh I do love an eerie tale, especially one that leans on folklore, faeries, changelings and the like. And as for the twisting of the twisted ones well it made me think of The Call by Peadar O’Guilin (which has Irish Faeries in it) and if you’ve read it you’ll know how creepy and scary it is and you will definitely want to read this. It’s a slow, eerie atmospheric horror, you almost don’t think it’s a horror and then the words keep repeating in your head like a twisted mantra, a chill goes down your spine and you realise the hairs on the back of your neck are sticking up! This was a really enjoyable read I loved the chilling atmosphere of it all. #thetwistedones . . #titanbooks #folkhorror #horrorbook #horrorfam #booktour #bookreview #irishbookstas #bookstagramtour #creatorsie #rosbc #bookblogger #irishblogger #irishbookstagram #bookstagrammer #bibliophile
Good morning, so we got through Patrick’s Day it was a bit odd but we all did our best. Holiday time is over and now we need to work on establishing a routine. Made a point of getting up getting the girls breakfast and getting dressed, no sitting around in pjs mon-fri (unless it’s really needed) girls are at the table getting a bit of school work done I’m going to have my mug of tea and then I think I’ll get some cleaning done.. really tempted to pull out all of my books and rearrange the sitting room 🙈📚 what are your plans for today if you’re at home too? . . #socialdistancing #learningathome #irishblogger #irishparentingblogger #irishparents #irishmammies #wereinthistogether #bookblogger #creatorsie #rosbc #bookstagram
Needed some headspace the last couple of days, it’s all very overwhelming isn’t it. Can’t really keep calm and carry on when you don’t know what’s going on it’s more don’t panic and muddle through.. hope everyone is doing ok 🖤 . . #ihatefairyland #skottieyoung #graphicnovels #comics #instacomics #creatorsie #rosbc #irishbookstas #irishblogger #bookstagram #keepcalmandread
Incase you need some recommendations for self isolation here’s one of my favourite books from last year you should check it out 🖤 . . . #perfectlypreventabledeaths #hotkeybooks #deirdresullivan #yabooks #yabookstagram #witches #creatorsie #rosbc #irishbookstas #irishblogger #bookblogger
Good morning.. kids were off school yesterday so I had a bonus day off, back to normal today and the daily struggle to leave the house has kicked in.. we got this 🤷🏻‍♀️🙈😅 . . . #struggleisreal #creatorsie #rosbc #irishbookstas #irishblogger #bookstagram #bibliophile #books
Every time I go online these days it’s all bad news, end of the world type shit so please excuse me while I go get lost in some comics and move into my books because reality is just a bit too much right now.. . . #papergirls #imagecomics #graphicnovels #escapereality #creatorsie #rosbc #irishbookstas #bookstagram #bookblogger