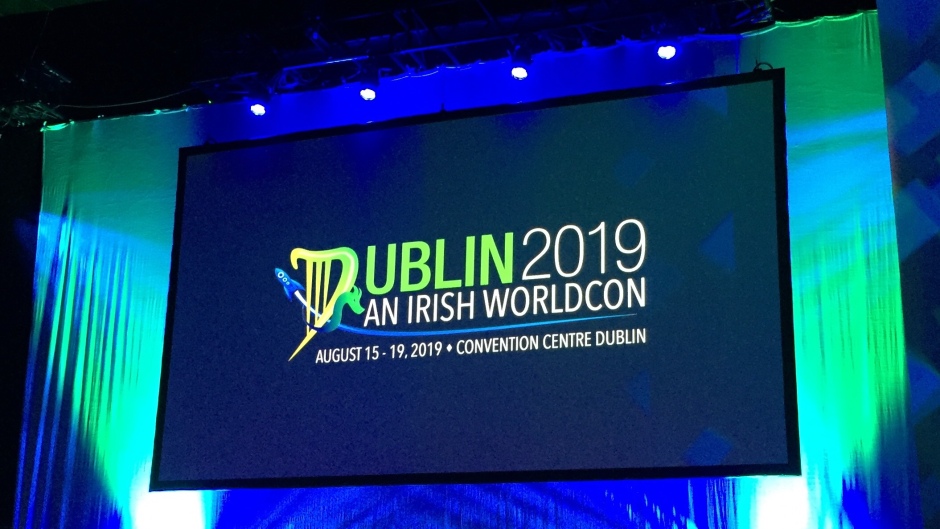 Well hello! I finally got to go to WorldCon Dublin 2019 and the weekend only flew by so I thought I’d give you a look at what we got up to!

I took my girls with me, Aunty Gwen went too and our friends Carolyn and Kayleigh/Hedwig. Out of all of us only Gwen had been to a WorldCon before. The rest of us had been to Comic Cons which are fun and last year Octocon which is where I really became part of the sci-fi community. Going to WorldCon was like coming home, it was Octocon but with lots more people. All of our Octocon family were there and that’s really what it felt like a big family, community, good friends.

On the Wednesday we made our way in for registration to get it out of the way and I wanted to give the girls a feel for the building. We got our packs and were ready to go.

I’ll give you a rundown and the highlights of each day, in between activities we spent alot of time catching up with friends, hanging out in the dealers hall and chilling out in the games room. We did plenty of wandering too as there was just so much to see.

Entering the dealers hall on day 1 was like walking into book heaven, all of the stalls had books! We met Hedwig then got chatting with Gwen and Carolyn and suddenly Hedwig gets this look on her face leans over and says to the guy standing near us “Sorry aren’t you Joe Hill?” JOE FRICKEN HILL! He turned around said hi and shook all of our hands, it was so cool! The girls were looking at us like why are you guys freaking out, I said that’s Joe Hill, he’s Stephen Kings son and Abigail knows who that is so then she understood and was like woah! So that was our first author encounter (and I swear we met him around every corner after that I was like I promise I’m not stalking you 😂)!! 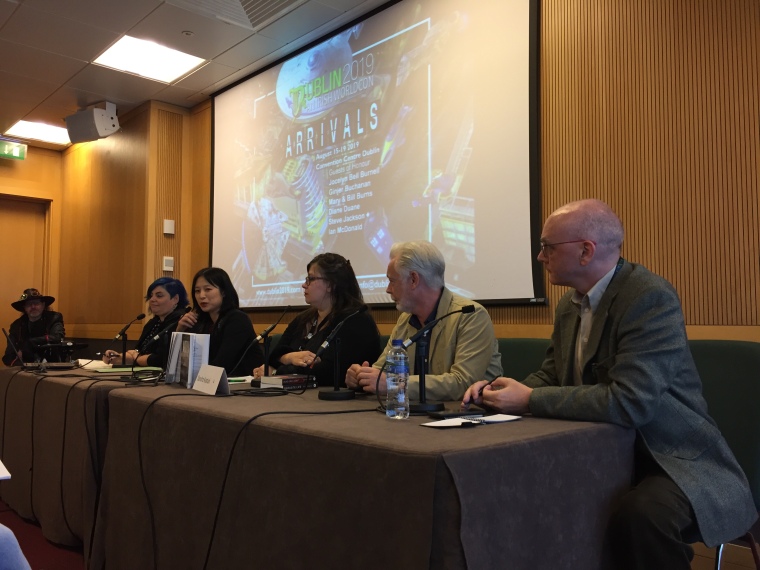 It was a really enjoyable panel we sat right up the front and I was surprised that my girls enjoyed it too. We found out the inspiration behind Artemis Fowl is his brothers and the trouble they got up to as kids, he has a few of them lol. And Michael Scott’s favourite villain is the Other Mother from Coraline. It was a fun panel.

We made our way out to The Point then to see the Lego and Art Exhibits which were pretty cool. Bumped into Holly Black again when we got back Ella got a picture with her. Then chilled out and played a game of Dobble before going home. 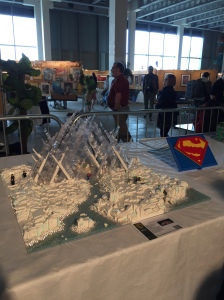 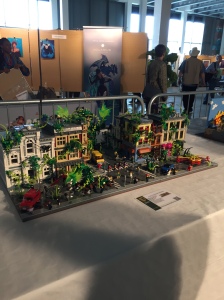 Friday was our longest day we went to 3 signings in the morning, RF Kuang, Peter V Brett and Joe Hill. All really lovely people all happy to sign Abigail’s notebook too. We did most of our book shopping and got more books than we could carry. 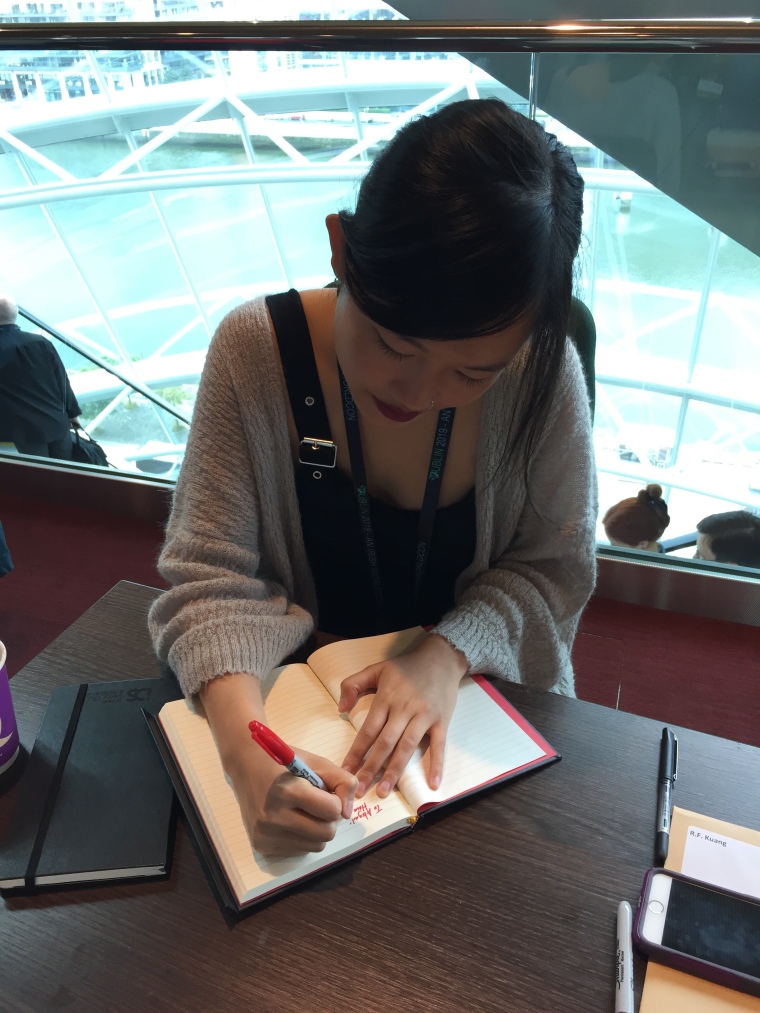 Then we met Victoria Schwab which made Abigail’s day, weekend, life! She was so lovely and even tried on the cat ears Abigail got her.

We hung out with our lovely friend and author Paul Carroll (love his books on Death)! Then myself and Hedwig went to a book party hosted by Orbit books. We met another Paul there who had qued with us for Joe Hill and he very kindly introduce us to RJ Barker who’s books I definitely need to read. We got to chat to Fonda Lee and we bumped into fellow blogger Asha which was a lovely surprise. 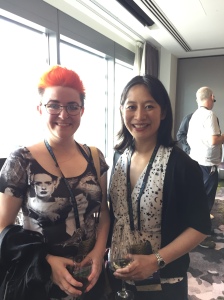 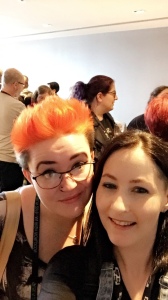 Afterwards we all went for family dinner then off to the orchestra. Yes a sci-fi orchestra which was just amazing! The girls loved it but we were very late getting home so we were super tired.

We were so super tired we slept in! The girls went to a signing to meet Astronaut Jeanette Epps and asked her questions about space like what happens if you squeeze apple juice out of a carton in zero gravity and she told them it stays whole and you can pop your straw in it while it floats to suck it up. Abigail asked who her inspiration was and she said her Mom which was really lovely.

The girls then had a workshop with Oisín McGann doing a giant space mural. 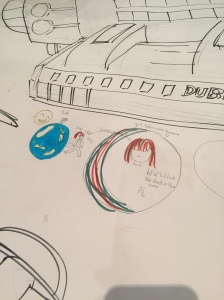 We went to a panel on Graphic Novel Adaptations of Genre Work with Holly Black (moderator) Victoria Schwab, Gail Carrigen and Raya Golden. It was good, loved hearing Victoria talk about the Steel Prince and was excited to here Raya mention that she’s working on some graphics for Peadar O’Guilins The Call!

We later bumped into another Octocon friend Noelle who introduced us to Jim Fitzpatrick which was pretty cool.

On Sunday we had a super early start as the girls had a Lightsaber Buildning workshop with our Chair James Bacon, this was a lot of fun and bloody harder than it looked but they got some really cool lightsabers out of it. By this stage Ella was flagging a bit so she spent a good bit of the morning hanging out in the kids zone making friends and chilling out. Abigail went to a workshop Earth From The Moon: a first glance into relativity with Dr. Estelle Blanquet and straight after that she had a writing workshop Supercharge Your Writing with Andrew Chamberlain. She really enjoyed them both.

While they were hanging out I went to a panel on Dark Fantasy For Children with Gili Bar-Hillel (Moderator) Magdalena Hai, Holly Black and Sarah Rees Brennan. It was interesting and explored whats too dark for children and how stuff that might scare us could go over their heads but simple things like a balloon (hello IT) could leave a lasting fear on them.

Ella spent the day in full cosplay mode as a character Drift from Fortnite, she made her mask herself. Here she is on the Throne Of Games Lightsaber and all 😆 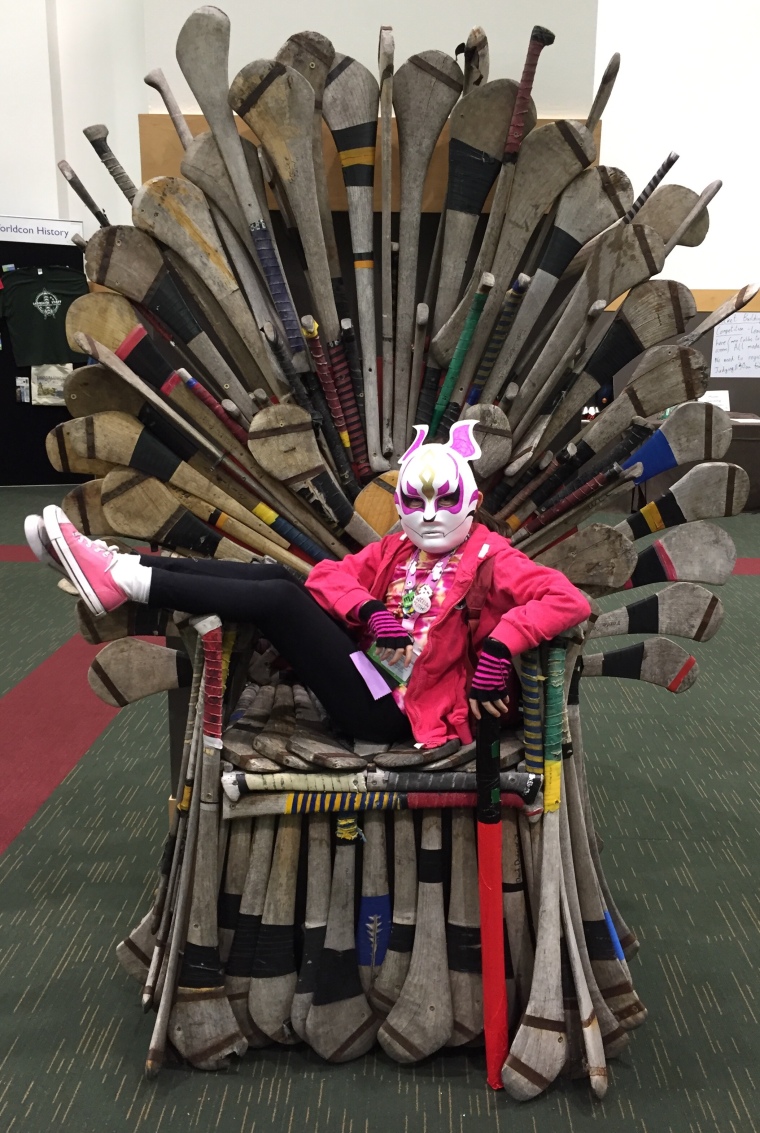 She wasn’t feeling the best though so we didn’t do the masquerade. After we said goodbye to Hedwig we went to a Heavy Combat demonstration and the girls were allowed to try out the swords and shortly after we headed home. 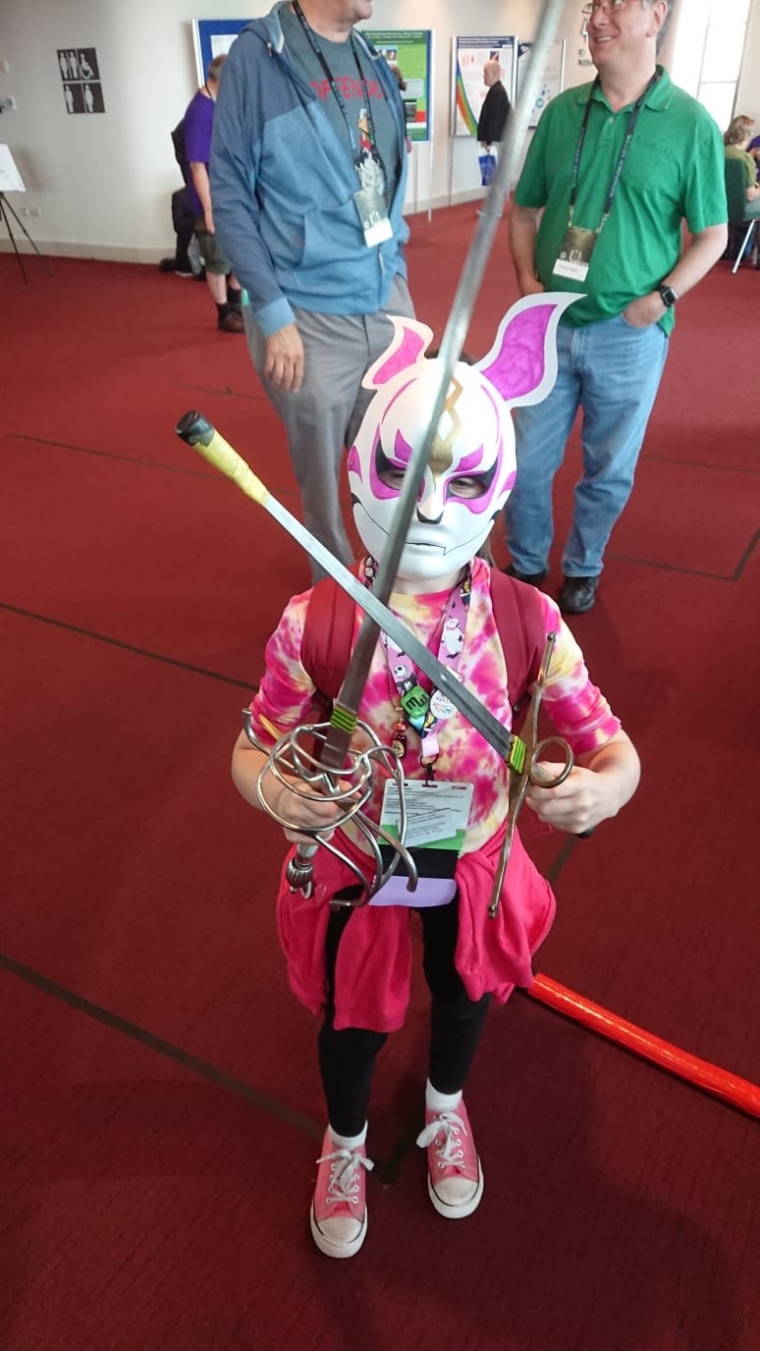 It was a pity we had to miss the Hugos but it was just on too late for the girls.

Our final day! We had one last trip around the dealers hall picking up a few last bits and saying goodbye to new friends that we had made. The girls had an RPG workshop with Dave Rudden called Greetings Heros which was a lot of fun. 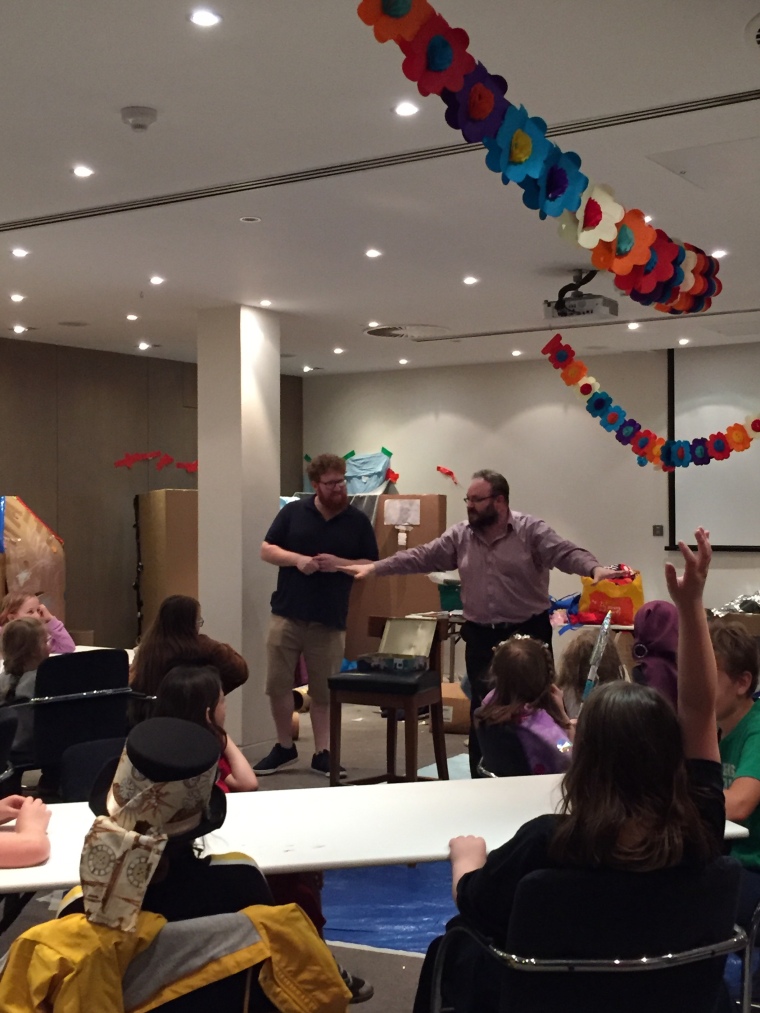 We went to one final panel and finally got a chance to see George RR Martin! We even took part in the queuing, the girls didn’t mind because it gave them a chance to sit down!

GRRM The Irish Connection with Colm Lundberg (Moderator) William Simpson, Peadar O’Guilin and Parris McBride Martin. It was a really enjoyable panel on their Irish Connections and great to have it confirmed that Westeros is indeed a map of Ireland upside down! 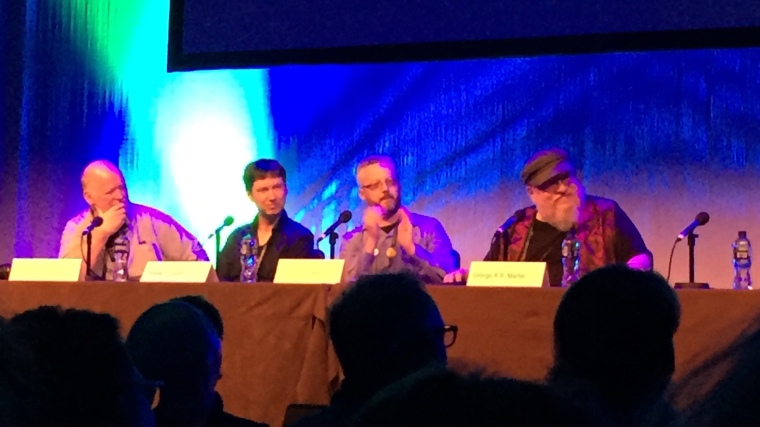 Afterwards he walked right by me and I said hello which is probably the closest I’ll ever get to him! We got chatting with William Simpson who is absolutely lovely, very passionate about climate change as is Abigail. William drew all of the storyboards for Game of Thrones and while we were chatting he drew a dragon for Abigail in her notebook! So very cool. 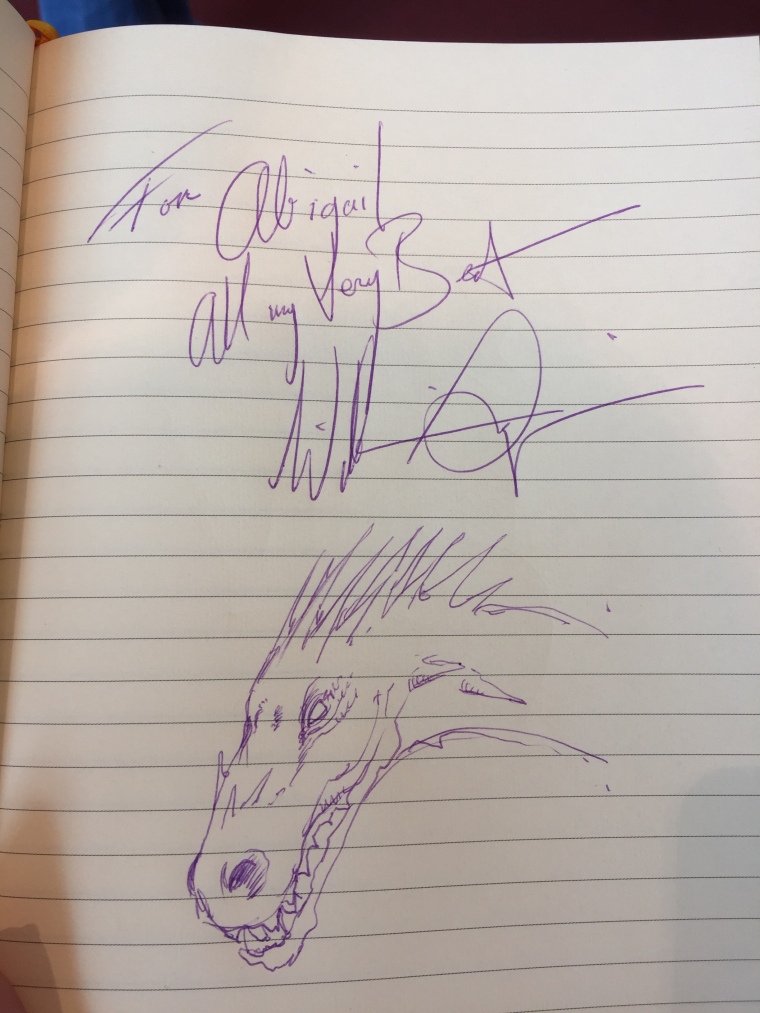 The day ended with the Closing Ceremony hosted by the brilliant Eoin Colfer, we were all nearly in tears by the end we just didn’t want it to be over. Two weeks later and I still can’t believe its over. I miss my friends, the chatting the laughs learning to play new games and nerding out over books. I’ll have to start saving for another one and hope that it comes back to Ireland again some day.

That was our experience of WorldCon, we had the absolute best time ever and just didn’t want it to end. I’m so glad I got to share the experience with my girls they loved it and are excited to go to more Cons (watch out Octocon we’re coming for you) fingers crossed we get to another WorldCon soon. 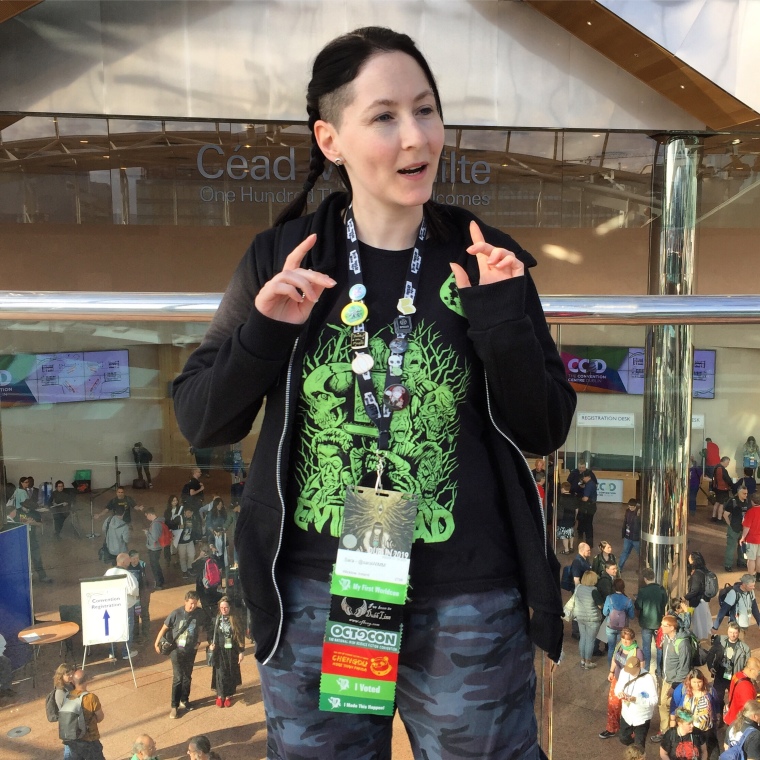 There I am looking for the next Con 😆