Hello and welcome to the RandomThingsTour for Beton Rouge by Simone Buchholz.

Many thanks to Anne and Orenda Books for having me on this tour. 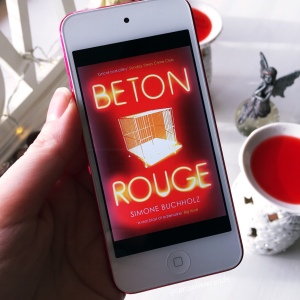 “On a warm September morning, a man is found unconscious and tortured in a cage at the entrance to the offices of one of Germany’s biggest magazines. He’s soon identified as a manager of the company. Three days later, another manager appears in a similar way.

The magazine staff were facing significant layoffs, so sympathy for the two men is in short supply. Chastity Riley and her new colleague Ivo Stepanovic are tasked with uncovering the truth behind the attacks, an investigation that goes far beyond the revenge they first suspect, to the dubious past shared by both victims. Travelling to the south of Germany, they step into the hothouse world of boarding schools, where secrets are currency, and monsters are bred…monsters who will stop at nothing to protect themselves.”

Simone Buchholz was born in Hanau in 1972. At university, she studied Philosophy and Literature, worked as a waitress and a columnist, and trained to be a journalist at the prestigious Henri-Nannen-School in Hamburg. In 2016, Simone Buchholz was awarded the Crime Cologne Award, and second place in the German Crime Fiction Prize, for Blue Night, which was number one on the KrimiZEIT Best of Crime List for months. She lives in Sankt Pauli, in the heart of Hamburg, with her husband and son

We start the book off with a naked man in a cage who has obviously been tortured and left on display outside of the newspaper company he just happens to be a manager in.. but that’s not the only interesting thing going on in Beton Rouge. Chastity Riley, the public prosecutor, cuts an interesting path throughout the story. We get a good insight into her life as well as her work. She is put on the case with her new colleague Ivo Stepanovic to uncover the cause behind these attacks as yet another manager appears in a cage!

I havent read the first book but I didn’t feel I needed to as I was immediately gripped by the case at hand, Chastity is a bit of a gritty character but you also see a softer side to her later on which was good as the overall feel of the book is quite bleak. It’s a short enough read just under 200 pages and you wont see the time go as you get lost in uncovering the crimes, why were these men tortured, whats their common history and what is the end game? This is a very fast paced book and you will race to the end to get your questions answered.

Dark and gritty just how we like our Noir!

Many thanks again to Anne and Orenda Books for having me this tour, all opinions are my own and I am not paid to give them.