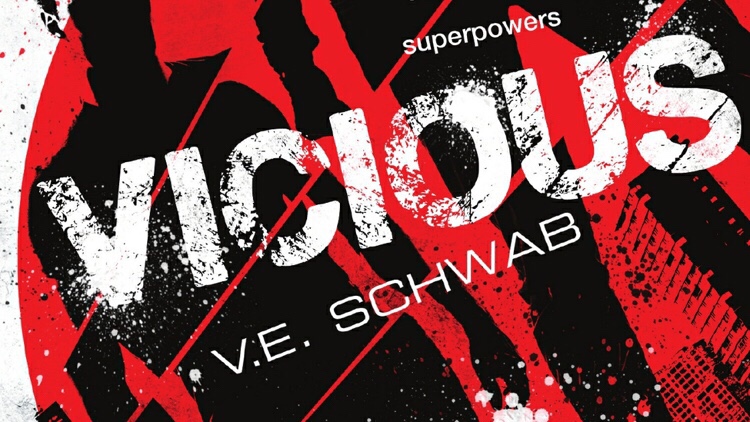 “A twisted tale of ambition,

I don’t even know where to begin with Vicious I just loved it. Just like with her Darker Shades series VE has created something so addictive. I have had Vicious on my kindle for a while now but I wanted to wait until we got closer to Vengeful’s release before getting stuck in. I’m so glad I did because I was lucky enough to receive a copy of Vengeful and oh man I can’t wait to get lost in that tomb. If Vicious is anything to go by I know it will be awesome.

“Victor and Eli started out as college roommates—brilliant, arrogant, lonely boys who recognized the same sharpness and ambition in each other. In their senior year, a shared research interest in adrenaline, near-death experiences, and seemingly supernatural events reveals an intriguing possibility: that under the right conditions, someone could develop extraordinary abilities. But when their thesis moves from the academic to the experimental, things go horribly wrong.

Ten years later, Victor breaks out of prison, determined to catch up to his old friend (now foe), aided by a young girl whose reserved nature obscures a stunning ability. Meanwhile, Eli is on a mission to eradicate every other super-powered person that he can find—aside from his sidekick, an enigmatic woman with an unbreakable will. Armed with terrible power on both sides, driven by the memory of betrayal and loss, the archnemeses have set a course for revenge—but who will be left alive at the end?”

Vicious is for fans of X-men as it has a kind of anti-hero vibe about it. The characters aren’t hero’s or villains but in a way they think they are but it’s so much more complicated than that. I love the way near death experiences are used throughout it’s a very clever way of looking at them. Argh it’s just a really good book!

It’s a sunny day and I’m home so I’m going to spend some time taking my next lot of pictures. Have really been enjoying having pictures ready to go, just means I have to come up with something to say in the caption.. or I can just ramble like I’m doing now 😆 do you plan what you’re going to say for each pic or just wing it? . . . #thestarswesteal #alexadonne #titanbooks #todaysthoughts #creatorsie #irishbookstas #thewritereads #rosbc #irishblogger #booksandcandles #bookaesthetic #bookishlife #myaesthetic
It’s Wednesday half way through the week, we got this 💪🏻 I just have to work today then I’ve a couple days off in which I wish to just sleep 😴 I think it’s the cold making me so tired I’m going back into hibernation mode.. who am I kidding I never came out of hibernation mode 😆 . . . #illuminaefiles #amiekaufman #jaykristoff #rocktheboatbooks #bookstack #bookpile #booktrilogy #aminotmerciful #scifibooks #yascifi #yabookstagram #creatorsie #rosbc #irishbookstas #irishblogger
Can’t seem to wake up this week would very much like to stay in bed 🛌 wouldn’t it be great if there was a like a national duvet day once a month or something 🤷🏻‍♀️ who’s with me 🙌🏻 . . #thestarswesteal #titanbooks #creatorsie #irishbookstagram #irishbookstas #bookblogger #irishblogger #instablogger #rosbc
Good morning.. it’s Monday 😑 I’m nearly finished Then Unlikely Escape Of Uriah Heep, I’m really enjoying it but it’s not one to rush through so it’s taking me a bit longer to read it, plus I had to work this weekend so that are into my reading time. Already looking forward to getting home this evening 📖 Hope you have a good day 📚🖤 . . . #currentlyreading #orbitbooks #theunlikelyescapeofuriahheep #irishbookstas #literarycharacters #rosbc #creatorsie #irishbookstagram #bookblogger #irishblogger
I fully got stuck into watching the new season of Sabrina this weekend and therefore have not been reading much but sure hey my brain needed a break anyways 🤷🏻‍♀️ I’ll get back to it this week 📖🍿 What have you been watching on Netflix? 💻 . . . #chillingadventuresofsabrina #graphicnovel #comixology #kindlefire #kindleunlimited #rosbc #creatorsie #irishbookstas #bookblogger #irishbookstagram #irishblogger #lovecomics
I am currently reading The Unlikely Escape Of Uriah Heep by HG Parry and just wow, I m taking my time with this one there is so much in it, it’s a book lovers dream featuring all sorts of literary characters.. Dorian Gray as always is such a mood and it’s years and years since I read it but this makes me want to read it again. Looking forward to curling up with it again this evening. What are you currently reading? 📖 . . #theunlikelyescapeofuriahheep #orbitbooks #literarycharacters #whatthedickens #currentlyreading #bookblogger #irishblogger #rosbc #creatorsie #irishbookstas #irishbookstagram #bibliophile