“With my boots propped on the table, I remember watching beads of wax roll down the candle, marking time between my victims spasms. The brothel room was sparse, and its bed in the corner remained undisturbed. I had assumed the role of temptress that evening, but delivered a different climax.”

I previously shared the cover reveal for Apricots and Wolfsbane (you can check it out here along with an excerpt) and I’m delighted I finally got around to sharing a review. Thanks to K.M. Pohlkamp for sharing her fantastic book with me I really enjoyed it. 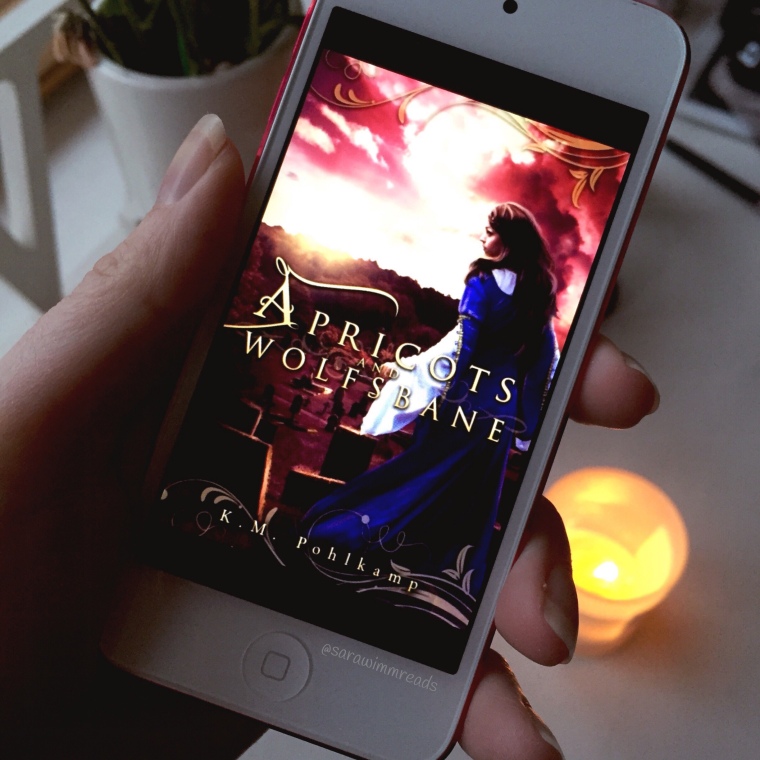 “Lavinia Maud craves the moment the last wisps of life leave her victim’s bodies—to behold the effects of her own poison creations. Believing confession erases the sin of murder, her morbid desires are in unity with faith, though she could never justify her skill to the magistrate she loves.

At the start of the 16th century in Tudor England, Lavinia’s marks grow from tavern drunks to nobility, but rising prestige brings increased risk. When the magistrate suspects her ruse, he pressures the priest into breaking her confessional seal, pitting Lavinia’s instincts as an assassin against the tenets of love and faith. She balances revenge with her struggle to develop a tasteless poison and avoid the wrath of her ruthless patron.

With her ideals in conflict, Lavinia must decide which will satisfy her heart: love, faith, or murder—but the betrayals are just beginning.”

This historical fiction has beautifully descriptive writing,  it’s very easy to get lost in the flow of words. I really enjoyed Lavina Maud’s character as a 16th century poison mistress, the ultimate anti-hero I’ve never urged someone on to kill so much before. I wanted so badly for all her marks to be successful I worried terribly when she got herself into trouble. I willed her to open her eyes a bit, take a look at the bigger picture and not be so trusting. She was the epitome of loyal but didn’t for one second think that others around her could be easily swayed and that let her down.

I’m not going to lie I was a bit disappointed in the end, I saw it coming to the climax and willed it to go in another direction, any direction but were it was going and I was bitterly disappointed when it didn’t. I wanted more Lavina, she deserved more.

I still think it’s a great book and anything that can evoke that kind of reaction in me where I shout WTF  NOOOOOO is good in my book. Female assassins are always going to be incredibly awesome, if you liked Nevernight by Jay Kristoff I think if you will really like Apricots and Wolfsbane. It’s not as gory and gritty in fact she is quite the sophisticated killer, which I enjoyed. Have a read and let me know what you think. Apricots and Wolfsbane by K.M. Pohlkamp is available now on kindle and in paperback.

Disclaimer : I received an e-book of Apricots and Wolfsbane for the purpose of a review all opinions are my own and I am not paid to give them.

Five Minds by Guy Morpuss was a really good read, such a weird take on reducing over population. Five random people sharing one body, things are bound to go wrong! 📖
Had another trip to the library, in the mood for some thriller and horror vibes this month, have you read any of these? 📚
It took me forever but I finally read House of Sky and Breath, I would have thrown the book across the room when it ended only it weighs a tonne but argh can’t believe I have to wait for the next book 🙈😅 it was fantastic I loved it!!!
Really enjoyed The Burning Girls by CJ Tudor, took me back to when I first read The Chalk Man really pulled me in 📖📚
There hasn’t been a book by VE Schwab that I haven’t enjoyed and Gallant is no exception, full of spooky vibes and lots of atmosphere it was an easy read perfect for marking halfway to Halloween 👻
Finally read The Last Wish, I really liked it, it’s basically most of the stories that were in the first series and it’s like Geralt is recalling them while he’s taking time to heal after an injury. I definitely think I would like to read the series, can never have enough of The Witcher like 🐺